Often, I get this question: can guppies breed with platys? So, I’ve decided to write an article on this topic, because many people are interested on this topic.

This means, guppies and platies can’t crossbreed, so no matter how hard you would like to have a guppy platy hybrid, it is impossible.

But, there are some interesting facts you might want to know about when keeping platies and guppies together.

Guppy males are so active, that they will often mate with other fish, even male platies. Often they don’t care, just want to reproduce.

Unfortunately, form these breeding attempts, there will be no fry. Guppies can’t impregnate platy fish, so they will not produce any fry.

I’ve seen few photos and videos online, claiming that those fish are guppy and platy crossbreed hybrids, but in reality I’ve never saw any results.

I’ve also never had the chance to crossbreed these two fish species (just like any other newbie aquarist, I did try though).

Can Platy Fish Have Babies Without Male? 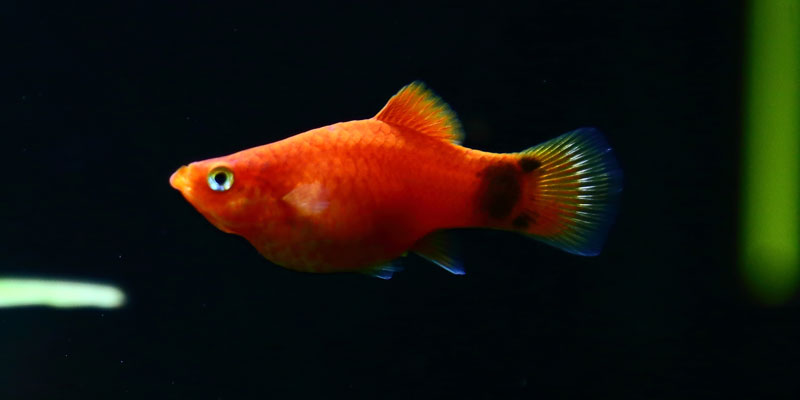 So, you got a nice female platy from the store and put her in your guppy tank. After a few weeks, you realize, there are platy fry in the tank. How is this possible?

Did your guppies breed with the platy female? Can a platy have fry without a male?

The answer is pretty simple. Most likely, you got your platy fish from the store, where they have been keeping platy males and females together.

Just like guppy females, platy females can also store sperm for months, even after one contact with the male. So most likely, you brought home an already pregnant platy fish.

Watch out, because your platy fish will drop fry a few more times without having a male in the tank.

What Fish Can Breed with Platy?

Platies will breed with other fish, which are from the same family: Xiphophorus.

One of the most common fish that you can buy at the pet store are swordtails, which are also from the Xiphophorus family.

Platies and swordtails will crossbreed, and you can have some really interesting results experimenting with this.

According to FishBase, there are 28 recognized species in the Xiphophorus family.

What Fish Can Breed with Guppies?

Just like with platies, guppies can be crossbreed within their family: Poeciliidae.

There are many fish species, which are part of the Poeciliidae family, the most common, which are also available in most fish shops are endler guppies and mollies.

Although, both endler guppies and mollies can interbreed with common fancy guppies, in most cases their fry will not be viable.

Breeding endler guppies with fancy guppies can result in genetic mutations which will not allow that strain of fish to survive in the long term. The offspring of enldler and fancy guppies are more prone to diseases or often infertile.

Fry from the crossbreed of guppies and mollies are almost always infertile, so they won’t be able to reproduce. I’ve found couple of cool pictures online of guppy-molly hybrids. I admit, these fish look interesting, and it can be a great project or experiment.

Now, hope that everything is clear, and you’ve learned something new from this article. If you have any question related to guppies or platies, please leave a comment below.

I also look forward hearing your experience about other crossbreeding projects you got involved in. Shoot me an email, if you have some interesting story to share.