Not long time ago, a reader contacted me and told me that she bought a pair of rare guppies (real red eye albino), because she wanted to breed them.

These guppies were about 14-15 months old. In the guppy world, this is considered old, because guppies live in general about 2 years.

Because this pair was at a discounted price, she decided to get them

These guppies had babies before, so what could go wrong?

The seller told her, that the female had 3 batches of babies from the first breeding (when the female was about 6-9 months).

Both, the male and female survived the shipping, so after acclimation, she put them together to breed.

It was all nice, until she realize that even though the female guppy is getting bigger in size, her belly is not growing and the gravid spot is also faded. There were no signs of babies.

At that point, she knew that something is wrong, so she contacted me, showing me this article, which states that guppies can have menopause just like humans.

Yes, guppies have menopause or andropause. In fact, some guppies can live quite some time, after they stop producing babies.

Female guppies become sexually mature at about 3 months old. This means that they can become pregnant and have babies.

Usually, guppy breeders don’t breed them at this early age for various reasons.

At 3 months old, the female guppy is still small and will only give birth to just a few fry. Being pregnant at early age, it will put a lot of stress on the female and will slow down its growth.

So, female guppies are usually bred when they become 6 months old. At this stage, the female guppy is fully developed and can drop 50 to 100 fry at once.

From one encounter with a male, a female guppy can produce babies for 3 to 6 months. So, a single guppy mum can have 150 to 600 babies.

Most breeders will only use a female for the first 3 batches of fry, because after that the quality of fry can deteriorate, so there is no point of keeping them.

Female guppies will stop getting pregnant when they get older. Some guppy females will have menopause much earlier, while other will still produce babies until they die.

For breeders, guppies that do not produce fry are useless, because they will take up aquarium space, will eat a lot and will only pollute the water.

Some breeders will keep these guppies for a while, or will sell them further to other breeders or as feeder fish. 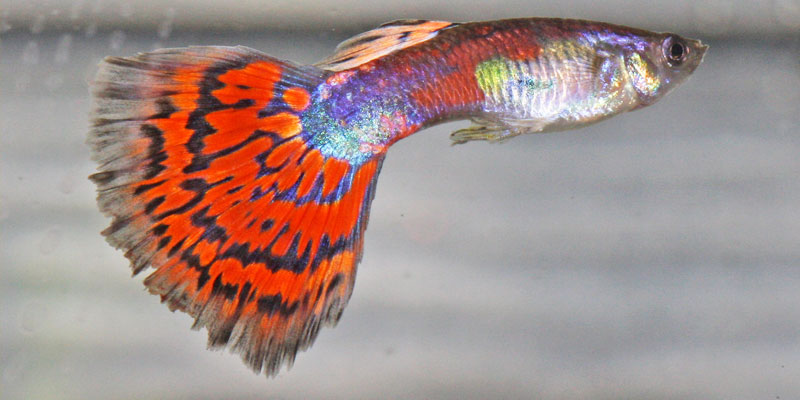 Unlike females, guppy males can reach sexual maturity at only 1 month old.

This is why is so important to separate the male and female fry at early age, if you are doing selective guppy breeding.

Because at one month old, the male guppies don’t show all their traits yet, they are not allowed to breed. Males are usually used for breeding at the same age as females, when they become 6 months old.

Male guppies are used in the breeding process only once and are not kept together with the females.

Males will only stress out the females, so there is no point to keep them together after inseminating the female.

One male guppy can be used to inseminate multiple females.

Males can also have “male menopause”, which in the medical world this is called andropause.

Males can become infertile much earlier than females.

Once male guppies get older, their ability to produce quality fry decreases. Their destiny is usually the same as their female’s partner destiny.

How to Care for Guppies in Menopause?

These guppies will usually grow much larger, because their energy is no longer focused on producing fry, but on growth.

Just feed them regularly, like before and make sure that water parameters are good and stable.

How to Delay Menopause in Guppies?

If you are breeding guppies, your goal as a guppy breeder is to produce as many guppy fry as possible.

For this reason, you might want to want to delay the menopause in guppies.

As mentioned above, the starting of menopause in female guppies depends on the individual fish.

From my experience, guppy menopause mostly depends on the genetics. If the mother has a shorter fertility period, it will most likely pass this onto their fry.

I feed my guppies the same food and keep them in good water conditions, and even so, some guppies get menopause much earlier than others. So, I assume it has something to do with the genetics and not really with the conditions in which you keep them.

I can say with confidence, though, that bad water conditions can make guppies infertile. An ammonia shock can cause menopause in guppies, so make sure that water parameters are good!

Do Guppies Have Menstrual Cycles or Periods?

Just like other fish, guppies don’t have menstruation, so they don’t go through the process of discharging blood as mammals or humans do.

Guppies have a gestation period of 25 to 35 days.

This means, that guppies will give birth to live fry once every month, until they get into menopause.

So, hope this quick article was useful and now you understand how guppy menopause works.

If you have any other question, please leave a comment below or send me an email.